The Identity of Jesus 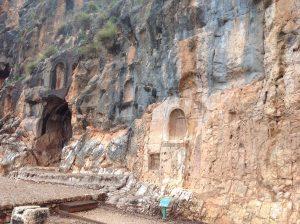 “Whom do men say that I am?” – Jesus. The picture here was taken at Caesarea Philippi, in the northern regions of Israel. Jesus had traveled to this specific spot with His disciples to ask an important question related to His identity. Located at the southwestern base of Mount Hermon, Jesus had marched deep into “enemy territory.” According to the apocryphal books of Enoch, this was the place where the Watchers had set up their headquarters upon being cast down from Heaven. This was a demonic stronghold, with the lake inside the cave being known as one of the “Gates of Hell.” The niches in the wall represented the places where idols were placed in honor to Pan and other false deities. In the very center of demonic power, Jesus gives an awesome promise: “The gates of hell will not conquer the Church that He is establishing!” How does He have the authority to give such a vital promise?

His Identity is Demonstrated through His Names

Throughout the New Testament, Jesus both claimed to be and was called God. In John 1.1, the Word that created all things was before time. He was both “with God” and “is God.” In John 20.28, Thomas recognizes Jesus as his Lord and God. Paul understood that it was “without controversy” that God was manifested in the flesh (1 Timothy 3.16). In Hebrews 1.8, the Father calls the Son “God” after commanding all the angels of Heaven to worship Him.

In addition to these statements, Jesus personally claimed to be God. He professed a unique relationship to the Father that was viewed as blasphemy in John 5.17-18. In John 8, He claimed to be the great “I am” of Moses’ day. In John 10, He confessed that the Father and He were “one.” In each of these instances, those hearing the claims understood these to be admission of Deity – and they sought to kill Him.

Not only is Jesus referred to as “God,” but also He is called “Lord.” This title was one that the Roman emperors reserved for themselves when they believed they had ascended to deity status. Jesus freely used and received this title. Paul is emphatic in Philippians 2 that one day, every one will recognize Jesus as Lord and will bow at His feet.

So, concerning the identity of Jesus – who was He? Based on the authority of Scriptures, orthodox Christianity has recognized Jesus as “God with us.” He is not an exalted man who became God. He is not half-man, half-God. Jesus is 100% God who added to Himself the nature of man as well.  While many religions deny the claims of Jesus, it is incumbent upon Bible-believers to hold up the banner high concerning the identity of Christ.