A Shovel, Pick, and Inerrancy

In a recent post, The Reliability of our Bible, we discussed the manuscript evidence that demonstrates the reliability of the Bible (specifically the New Testament) we have today. In stating that the text is reliable, we are saying that we can confidently believe that what we read today is virtually identical to what was read nearly two thousand years ago by the early church. Whether someone believes the message that this text conveys is a different story.

In this post, we add more evidence as to why the reliability of the text can be trusted. Not only do we have strong manuscript evidence, but also we have…

When the shovel and pick are put into the earth in the region of the Holy Land, the Bible has been vindicated time and again. Listed here are a few examples of what archaeology has uncovered that has validated the claims of Scripture. For those who recognize the authority of the Bible already, these findings are simply icing on the proverbial cake – but for those that are inclined toward skepticism, then perhaps these may provoke more investigation into the reliability of the Scriptures.

Genesis 6 tells the story of Noah building a boat and saving all the animals. Later, he and his wife, along with his three sons and their wives, repopulated the earth. For some, this must be a fable or tall tale. Yet, in the ancient world, belief in a universal flood was common. The Sumerians, Babylonians (do you remember reading about Gilgamesh in school?), Egyptians, and Greeks recognized a global flood in which only one righteous family was spared along with a representative of the animal life. While the stories have some differences, archaeology reveals that the belief in a global flood was not found only among the Hebrews. Each civilization, in its collective memory, pointed back to a cataclysmic event and made sure it was not forgotten.

Who were the Hittites?

Abraham and his wife were buried in a place purchased from a Hittite. David committed adultery with the wife of Uriah the Hittite. These people appear throughout the Old Testament, but for the longest time no evidence confirmed their existence. For Christians living during the rise of Rationalism and Higher Criticism, the mention of the Hittites was a tool of the scoffers to show that the Bible was not historically accurate. Yet, in 1906, digging outside Ankara, Turkey archaeologists discovered a treasure trove of material vindicating the biblical record once again. 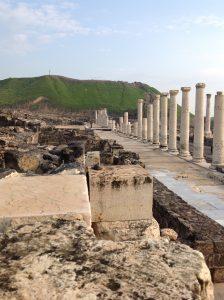 After King Saul’s death, his body was discovered by the enemy. They took his body and armor and had them fastened in a temple at Beitshe’an. This public display of victory gave glory to their gods and humiliation to Israel. The men of Jabesh-Gilead bravely came to rescue his body and give it an appropriate burial. Excavations at this ancient city confirm the existence of the temple mentioned in the Bible narrative.

The temple was on top of the hill overlooking the city. The ruins of this city are still visible today as one walks through the streets where Bible characters once roamed.

Has the Bible been accurately recorded and passed down to our generation? The manuscript and archaeological evidence overwhelmingly says, “Yes.”